Ah, late December, a time when we usually get a little wistful about finishing another revolution around the sun. Not this year. 2020 can kick rocks. Still, you came along for the ride with us on SideDish as I, a new-to-Dallas editor, took on the city’s dining scene in whatever form that meant this year.

In this roundup, I skip some of the popular News Bites blog posts—timely and topical yet not really worth a revisit—and others like the best deals on National Margarita Day, which is important food journalism to be sure, but not too useful for us now. Even stories like Where to Order Takeout in Dallas Right Now and Where to Support Black-Owned Food and Drink Businesses were strong 2020 posts for good reason, and should you need them for reference in 2021, they’ll still be relevant. Again, not much of a thrill to re-read though. So with some obvious hits culled from this list, here are SideDish’s top-read stories of the year.

Long before 2020 would steal away restaurants crushed by the reality of this year, Alice Laussade was rightfully yelling at us: SUPPORT YOUR FAVORITE PLACES BEFORE THEY’RE GONE. Oh, how painfully prescient she was.

Well before the delivery and takeout market was doing record numbers amid a pandemic (seriously, stocks are up 50 percent, DoorDash went public with an IPO recently), we covered how delivery apps were doing some shady things.

Y’all really loved this succinct post about where the Dallas-born globetrotter and PBS television host ate. Spoiler alert: It’s all the places we always tell you to eat!

Even before the pandemic, new 25 percent tariffs on goods (wine, cheese to name two) imported from Spain, France, Germany, and the U.K. are still very much here. Despite calls to end the tariffs, the wine world is still saddled with the extra cost. And this was before a global pandemic hit.

Sheltering in Place: A Daily Itinerary for Our Shared Coronavirus Reality

Alice Laussade always knows how to make us laugh, cry, and, most often, laugh-cry. This post did all of the above.

This was an ode to missing coffee shops by writer and coffeehouse squatter Jonny Auping, and as a cold-brew-blooded Seattleite, I felt this essay in my core.

This one barely needs explaining, but if you were so good at quarantining that you missed this news, I’m actually impressed. Sandoitchi was the buzziest pop-up of the year. They consistently sold out of their Japanese sandos, like pork katsu squished between two slices of fluffy milk bread. Even Chrissy Teigen was obsessed. If you had one, count yourself lucky because there’s no telling when or if Sandoitchi will be making its return to Dallas in 2021.

The City of Dallas Will Launch a Temporary Parklet Program

Back in May, the city launched a pilot program for street side “parklets,” which, as they sound, are small (two parking spaces, say) areas where people can sit on a bench, or maybe dine at the adjacent restaurant. It’s a sign that Dallas is looking to become a little more friendly to pedestrians. As we stayed home a lot this year, Dallasites still wanted to explore and walk about the city; outdoors, luckily, felt like a safer choice, except that cars still dominated even small neighborhood nooks. The temporary parklet program was a glimpse at how to activate a space that doesn’t need to be merely a valet stand. An update: The program is moving along to approve grants to build up nicer (read: more permanent than temporary) parklets.

It’s a bummer of a headline, but I stand by it. In the first round of Paycheck Protection Program funding, the restaurant industry—Texas’ second largest private sector employer, counting at least 1.2 million workers—received a little less than 9 percent of PPP. Of those restaurants represented, few are truly independent restaurants. As the year dragged on, we watched restaurants continue to struggle, ask for government aid, and look to more local organizations for help. 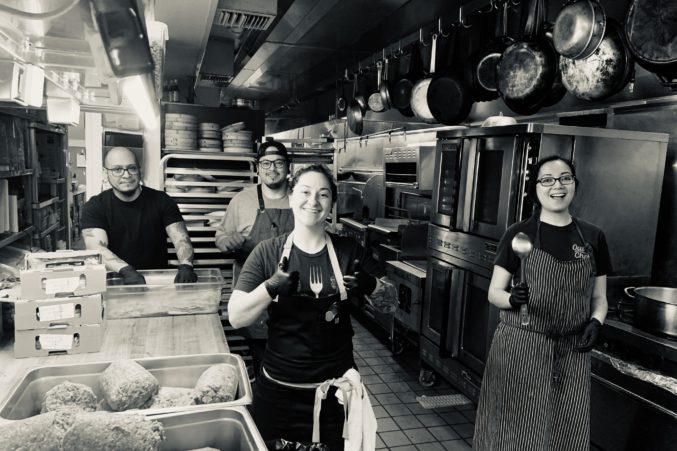 When COVID-19 shuttered restaurant, many took a long time to come back, if they did at all. In that interim, chefs and cooks couldn’t sit on their hands, whether their restaurants were open or not. So they did what they always do: cook for hungry mouths. With people out of work, giving people food to eat wasn’t just about a dining experience, it was about survival.

The Workers on Dallas’ Food Frontline

When Gov. Greg Abbott reopened Texas dining rooms, waitstaff were being called back into work. We spoke to servers, cooks, and other behind-the-scenes staff about what they were going through in those early moments.

Dallas Restaurant Employees Are Contracting COVID-19. So What’s Next?

In June, a month or so after dining rooms began reopening, the positive COVID-19 cases started rolling in, with restaurant workers having some of the highest hospitalization rates in Dallas County.

Going into 2021, I hope we’re heeding the lessons of 2020. We—as an industry, as people—were called out and called in this year to hear the voices when they tell us they’ve been treated unfairly. This summer, in the midst of protests against police violence toward brown and Black bodies, we spoke to Dallas Black leaders in the food community; we passed them the mic, so we can listen.

How One Organization Is Still Trying to Help Undocumented Workers

During her furlough, former Armoury D.E. general manager and bartender Rosey Sullivan didn’t sit idle while she saw line cooks and other back-of-house workers suffer without a safety net. Looking to a nonprofit model from New York, she launched the Undocumented Workers Fund Dallas to provide microgrants for those getting zero financial aid elsewhere. (This one got people riled up. Thanks for the web traffic!)

Mauricio Gallego loves sotol. Not merely appreciates, but reveres the Mexican spirit because, like him, it’s a product of the Mexico he knows and loves. It’s one reason why he wanted to bring sotol to Dallas in a big way, showcasing the distillate on his cocktail menu and pouring drams of stuff you don’t often see stateside. Ayahuasca Cantina is tucked away in the back for clandestine cocktails and food by chef Hugo Galvan (Purepecha, Casa Komali, El Bolero). Meanwhile, it’s a bright and plant-bedecked Xamán Cafe that greets you up front where Mexican espresso and single-origin pour overs exist alongside Mexican pastries. I tell people about this place a lot. 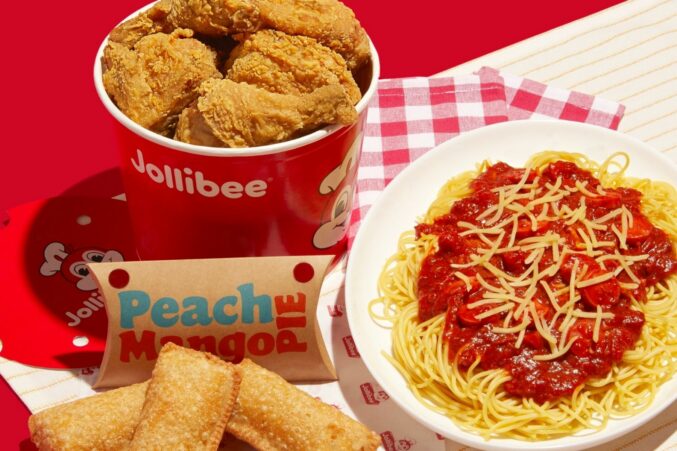 Many are jumping for joy that Jollibee and its famous Chickenjoy™ buckets are coming to Plano.

When Jollibee came to town, everyone was abuzz about the Filipino-based fast-food chain bearing fried ChickenJoy meals and ube desserts. As someone who’s made a Jollibee run or two in Manila after one too many ginebra and tonics, I get it. But an international chain such as Jollibee doesn’t open just anywhere; it’s arrival, to me, made me think about just how large the population of Filipino people is in North Texas.

More Than Nostalgia, Thunderbird Station Preserves the Past

Deep Ellum does not want for bars, yet Kim Finch (Single Wide, Double Wide) opened this watering hole out of a former service station. It feels much more like a preservationist’s ode to Deep Ellum history than a kitschy carbon copy of it.

As revelations were coming to light in the national wine world, specifically within master sommelier circles, Eve Hill-Agnus turned her lens toward Dallas. There, she found that what was going on in New York was hitting much closer to home. 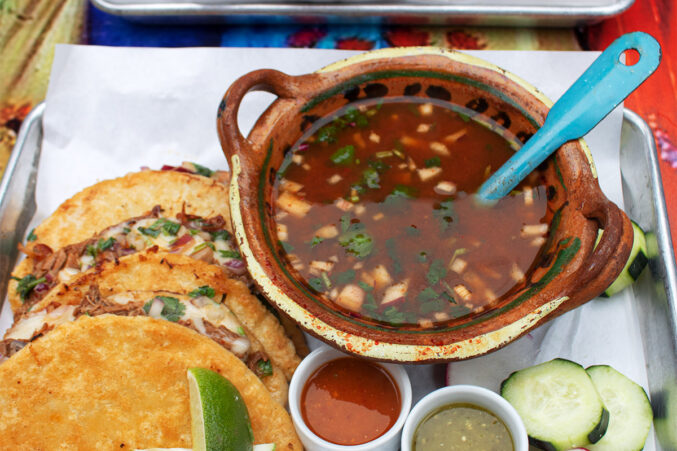 Frida’s Tacos serves much more than quesabirria—tripe and lengua tacos, al pastor off the trompo, for example, and healthy-leaning taco bowls with grilled chicken—but the quesabirria is undoubtedly the “it” taco of the moment.

The hottest taco trend is gaining ground in Dallas. One of the latest instances comes from Frida’s, which opened this year in the former Taquero space.

Inside the Rise of Detroit-Style Pizza in Dallas

In 2020, the inner workings of the universe managed to bring us four places slinging thick, square pie, the likes of which you’d see in Detroit. Among other things, 2020 was the year of comfort food. And a few Detroit transplants wanted the pizza they missed from back home.

Easily one of the biggest arrivals of the year is Eataly Dallas. After all, it is a sweeping food emporium that lauds both Italian and local goods. It’s a food wonderland with freshly made pasta and pizza, a fresh seafood counter and a butcher shop, plus two restaurants. More than that, though, Eataly’s Slow Food ethos which drives how the company sources products locally from small farmers nods to the fact that Dallas shares those values.

If You Must Bail on Your NYE Reservation, Please—for the Love of Restaurants!—Call First

The Vaccine Is Not “Fairy Dust,” and Normalcy May Still Be Months Away

By Dallas News Today
4 hours ago

By Dallas News Today
5 hours ago

Dallas and the Summer of Tiki